Week 2 – I travelled to Colombo then on to a rented villa in Kandy for an exploration of the surrounding inland area of Central Sri Lanka.

Like an intrepid explorer I travelled with my fellow artists to central Sri Lanka to see some of the great wonders of the world including The Temple of the Sacred Tooth, The Ancient City of Sigiriya and the Dambulla Cave Temple. 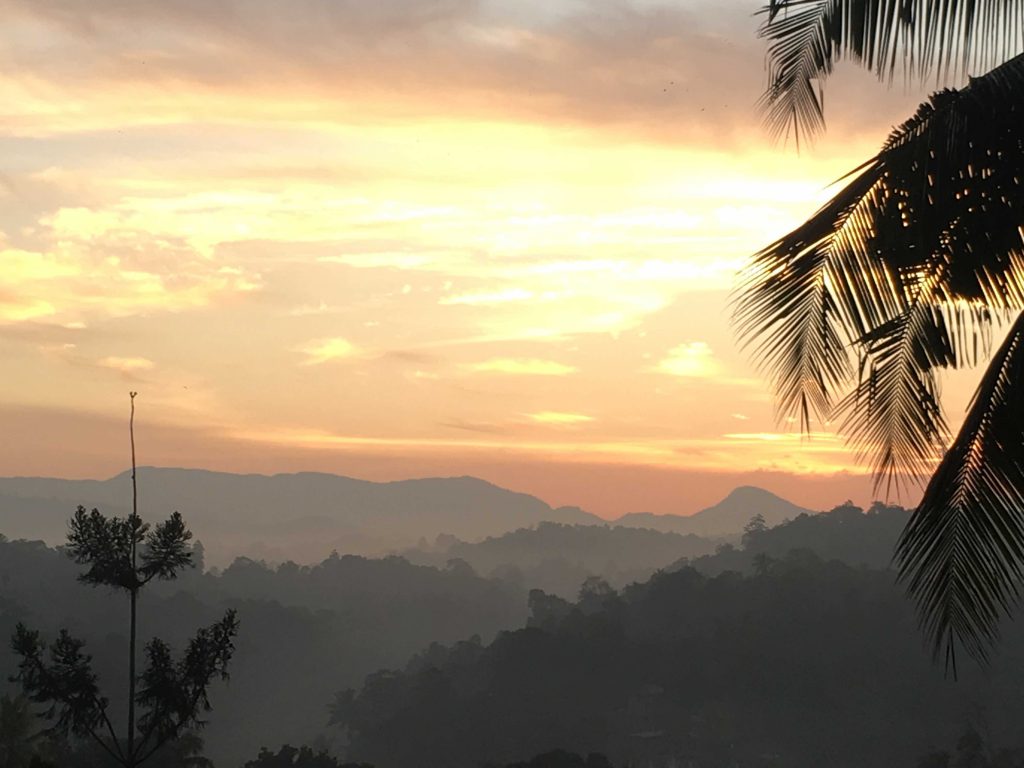 Two tuk tuks transported us up the steep roads through the village of Watapuluwa to Mountain View Lodge, our luxurious four storey rented villa situated on a mountainside with the most stunning and breathtaking views overlooking a lush valley.

After a warm welcome from Jay the caretaker I padded barefoot around the palatial pad peeking into each capacious ensuite room, comparing the balcony views amazed at the style, comfort and luxury Zoe found for us on AirBnB for a mere £20 each per night.

Day 9 Tues 21 Feb 2017
Today I felt more like a tourist than an intrepid international artist as we boarded a mini bus for a whirlwind tour of all the top sights in central Sri Lanka.  I’ll try and summarise. 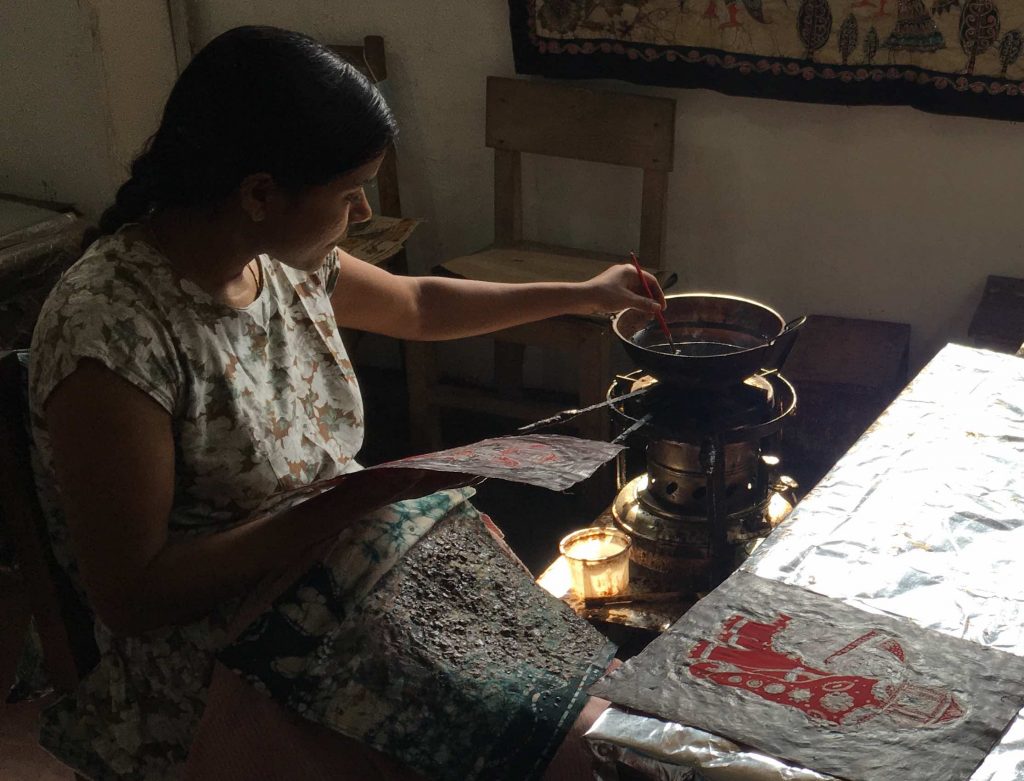 Batik: Our first stop a Batik factory in Kandy for a demonstration of how the intricate paintings are made. A pen like tool called a tjanting is used to draw pictures onto the fabric with the melted wax.  The most beautiful examples were overstitched with gold thread.

Botanical Gardens: Next the Royal Botanical Gardens at Peradeniya.  A spacious 147 acres with 4000 different species of plants. A delight to explore and marvel at unusual plants like the cannonball tree and its strongly scented flowers. 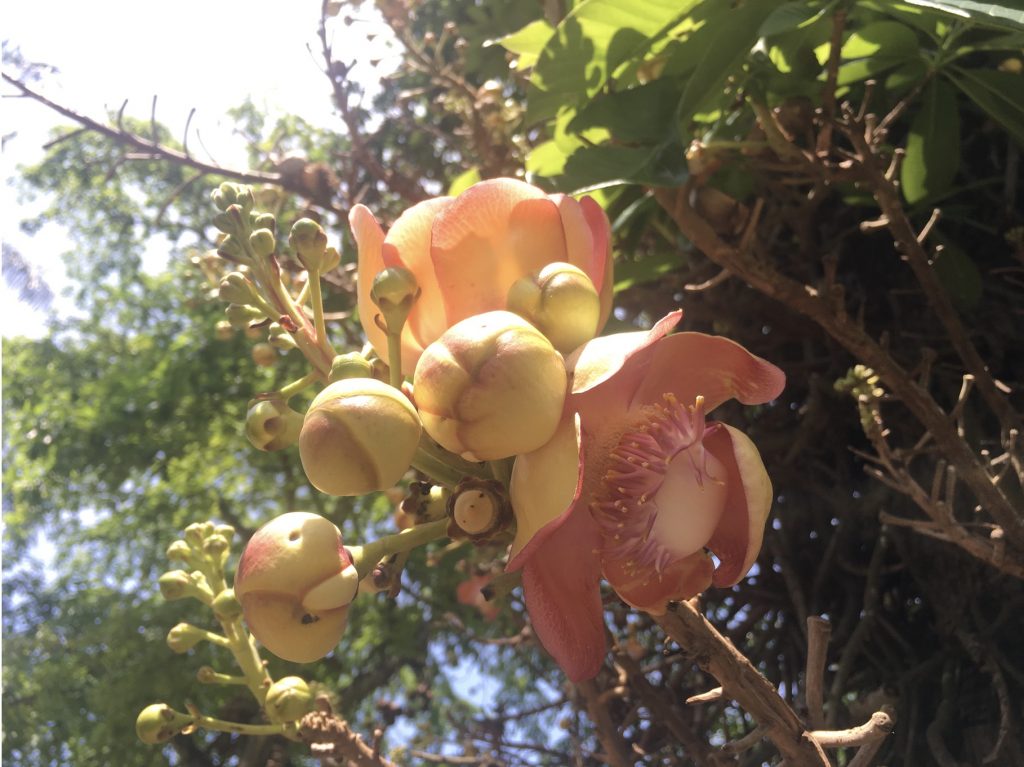 After a quick lunch we visited a Tea Factory to see the production process from field to cup, followed by a detour to The Spice Garden to see and taste freshly harvested nutmeg, vanilla, turmeric, cardamom, cocoa pods and peppercorn. 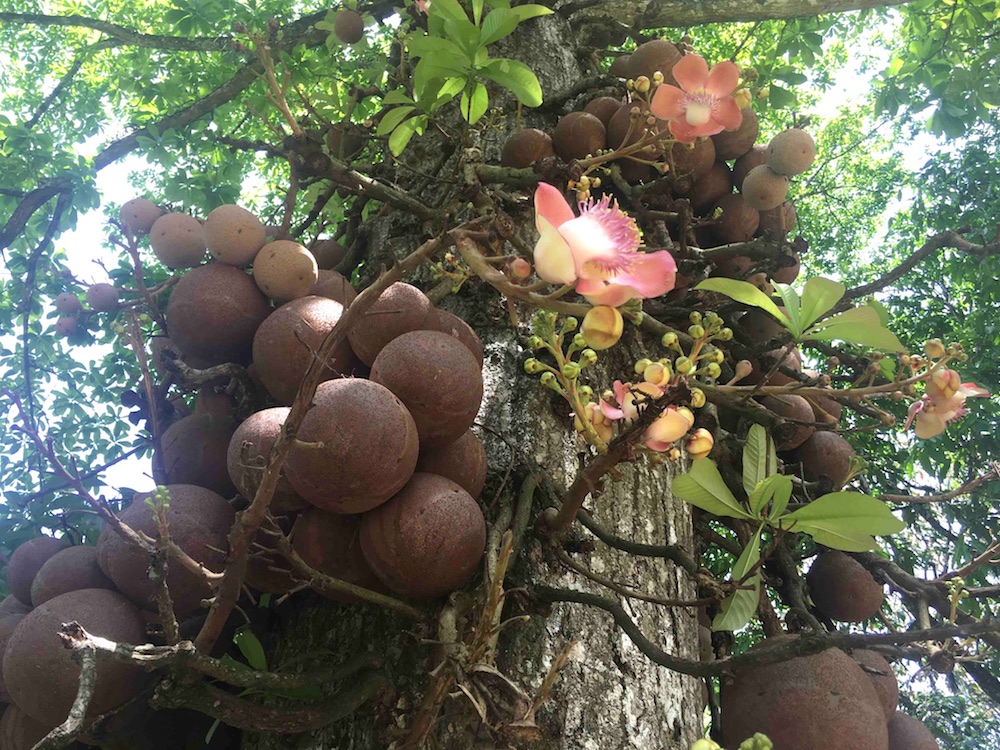 The Cannonball Tree fruit and flowers

The  next stop at the Kandy Cultural Arts Centre staged a traditional Sri Lankan dance show.  We left before the end as we wanted to beat the rush for the prayer ritual – or ‘puja’ – at The Temple of the Tooth believed to house the left upper canine tooth of the Lord Buddha. 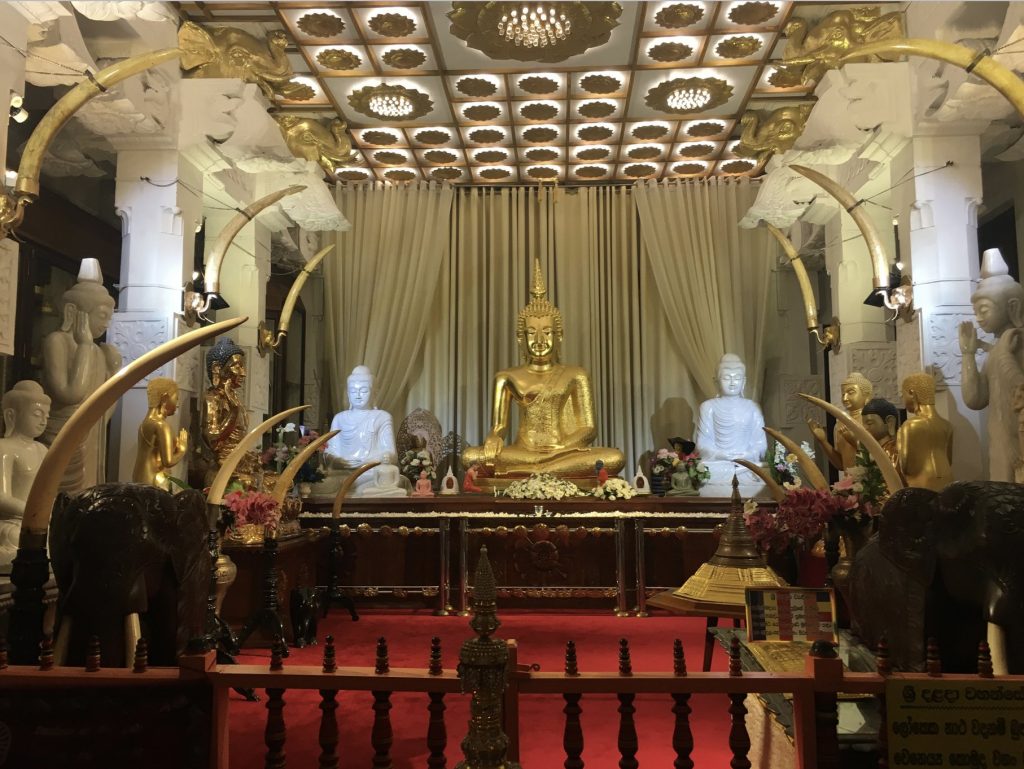 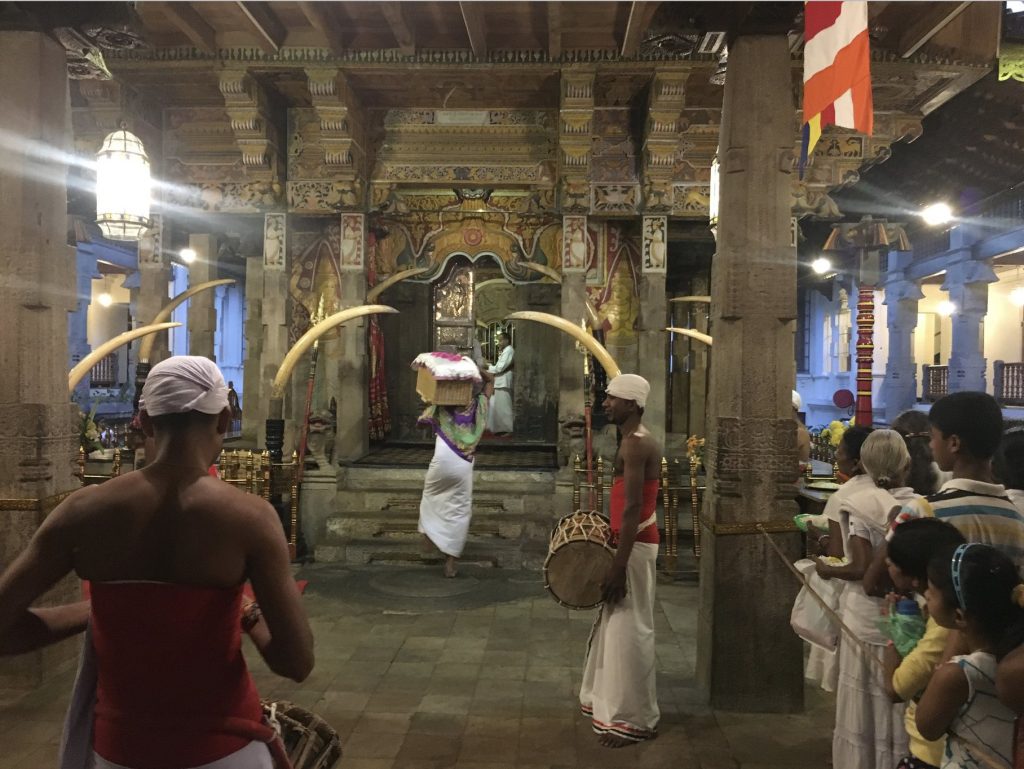 Temple of the Golden Tooth ceremony in Kandy

My day started with a heart stopping sunrise and ended with drumming, dance and a religious ritual that left us all exhausted.

We returned to the villa and decided that the next day we would stick to our schedule of researching Sri Lankan culture and not get too caught up in the tourist trail.

Day 10 Weds 22 Feb 2017
It’s easy to lose track of time when your in a tropical climate.  Although the heat is a welcome respite from the chilly British weather, clambering up sheer rock faces in 40°C is only something that can be attributed to mad dogs and, in our case, mad British and mad Scottish artists.

At every stop we are bombarded with a cacophony of repetitive and persistent offers for tuk tuks, tour guides, crafts, food, spices and temple paraphernalia in an effort to relinquish us of our rupees. We decide to pace ourselves and stick rigidly to our original schedule. 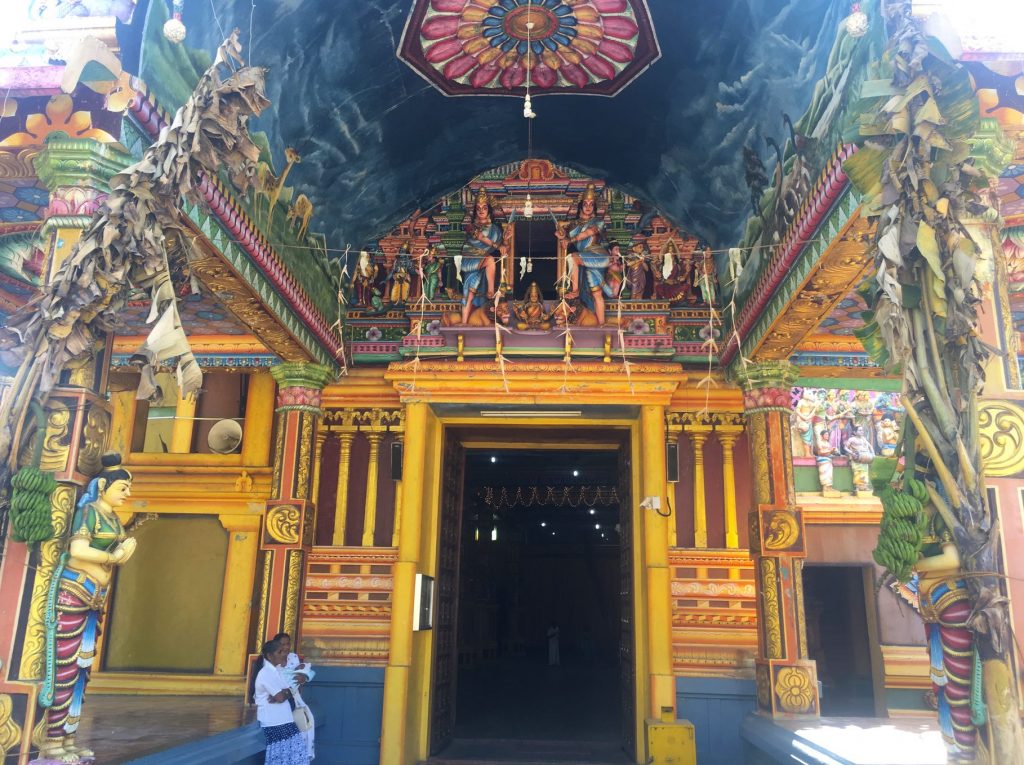 We start off with quick pit stop at the Sri Muthumariamman Hindu Temple in Matale before moving on to the main highlights of our trip. 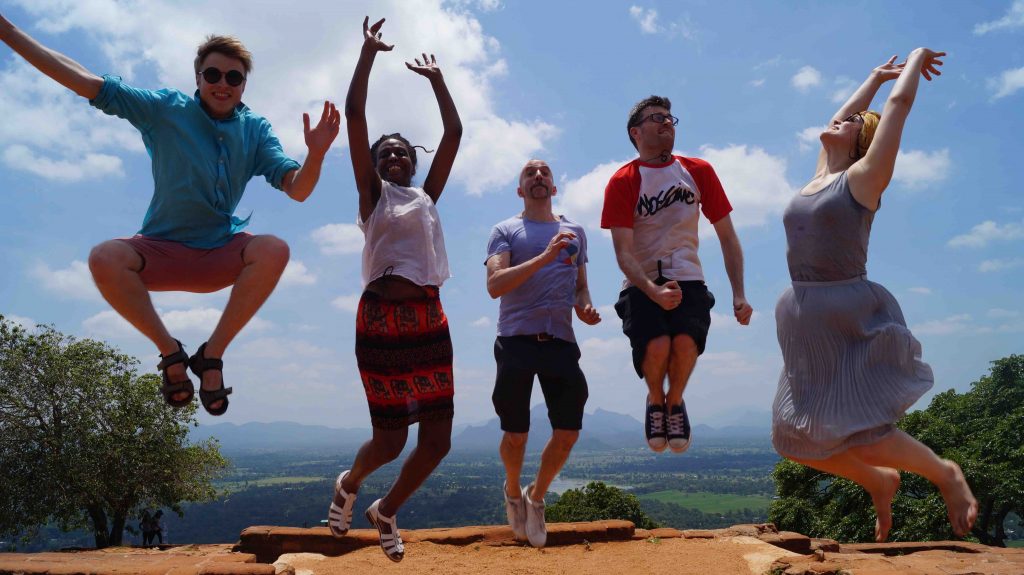 The Five Intrepid Artist Travellers reach the top of Sigiriya

The Ancient City of Sigiriya
Sigiriya is an ancient rock fortress located in the northern Matale District near the town of Dambulla.  The 660 foot high UNESCO World Heritage Site was originally built 400 years ago by King Kasyapa as an impregnable fortress and Sky Palace later used as a monastic refuge in the 16th and 17th centuries. 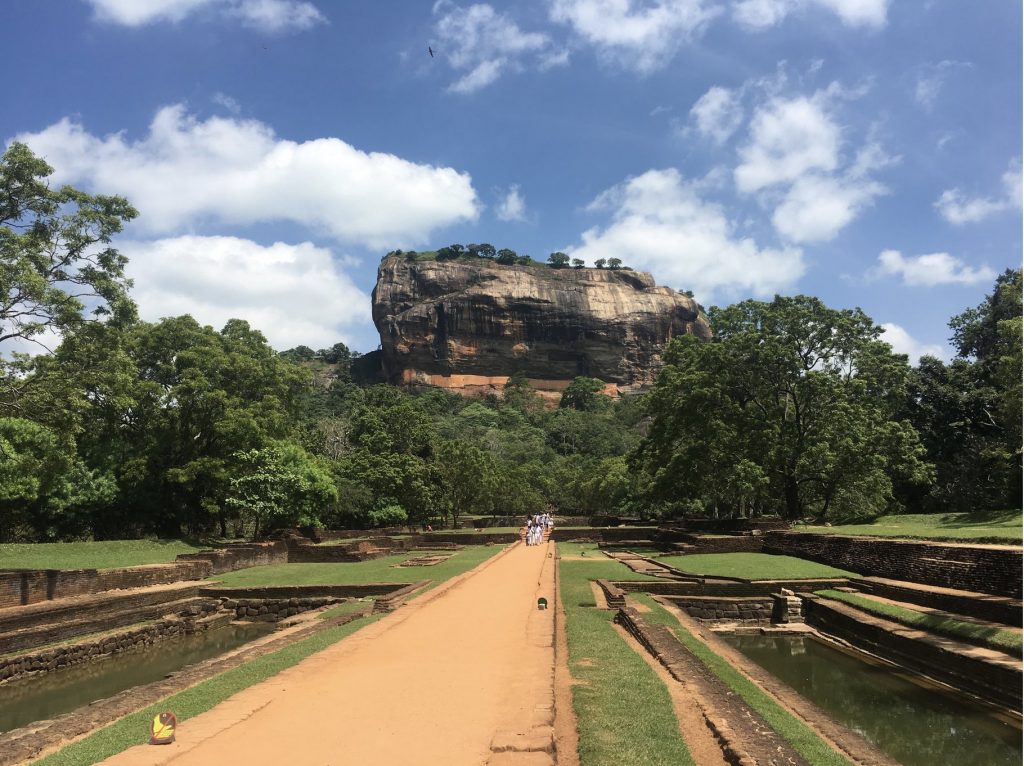 The Ancient City of Sigiriya

I amaze myself by clambering up the the 1,200 steps to the top.  This is the equivalent of walking up 60 flights in a 60 storey building.   I have to admit it was easier than I anticipated but still very tiring.  The reward was the jaw dropping 360° panoramic view of the surrounding countryside.  I, and all of us, felt a great sense of achievement.

Dambulla Cave Temples
The Golden Temple of Dambulla is a World Heritage Site comprising of five caves of varying size built in the First Century BC.  When you arrive the first thing you see is an enormous gold Buddha perched atop a vast Golden Temple. 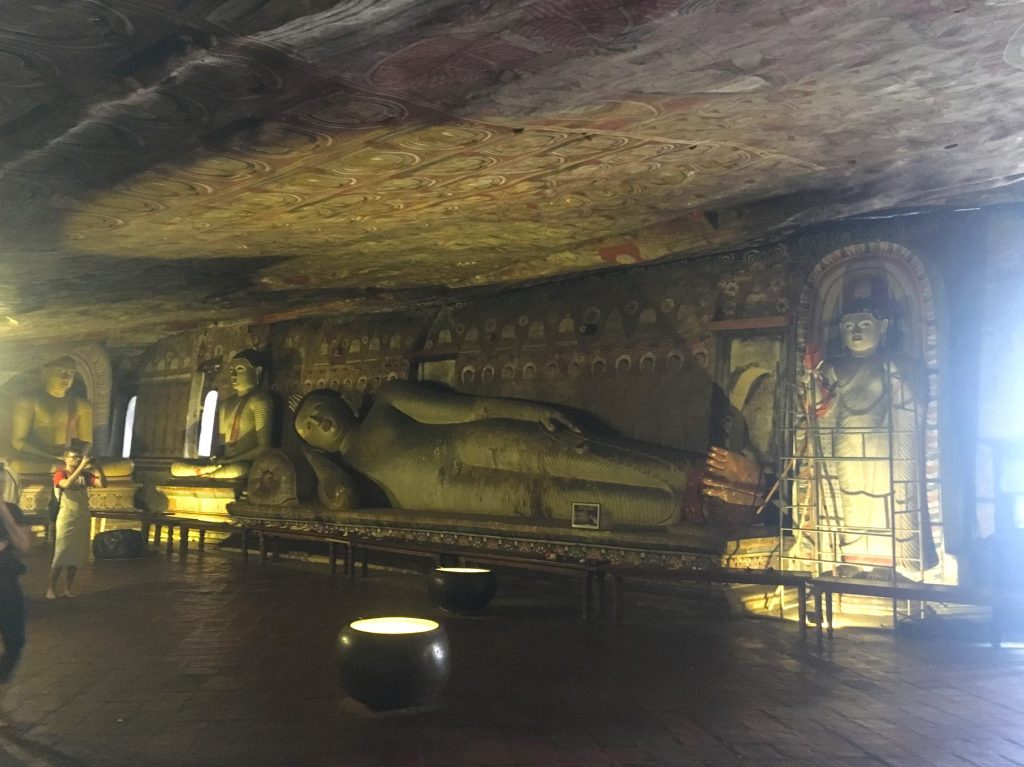 However once you ascend the steep steps of the rock face that lead to the caves you soon become entranced by the magnificent statues and preserved paintings of Indian Gods, Buddhas and Kings.  Truly a powerful and blessed experience.

Day 11 Returning to Hikkaduwa on Thursday felt like going home, back to Sunbeach to recover from the intrepid explorations, extrapolate the positives of a tourist’s perspective, and get down to the business of the presentation and performance. 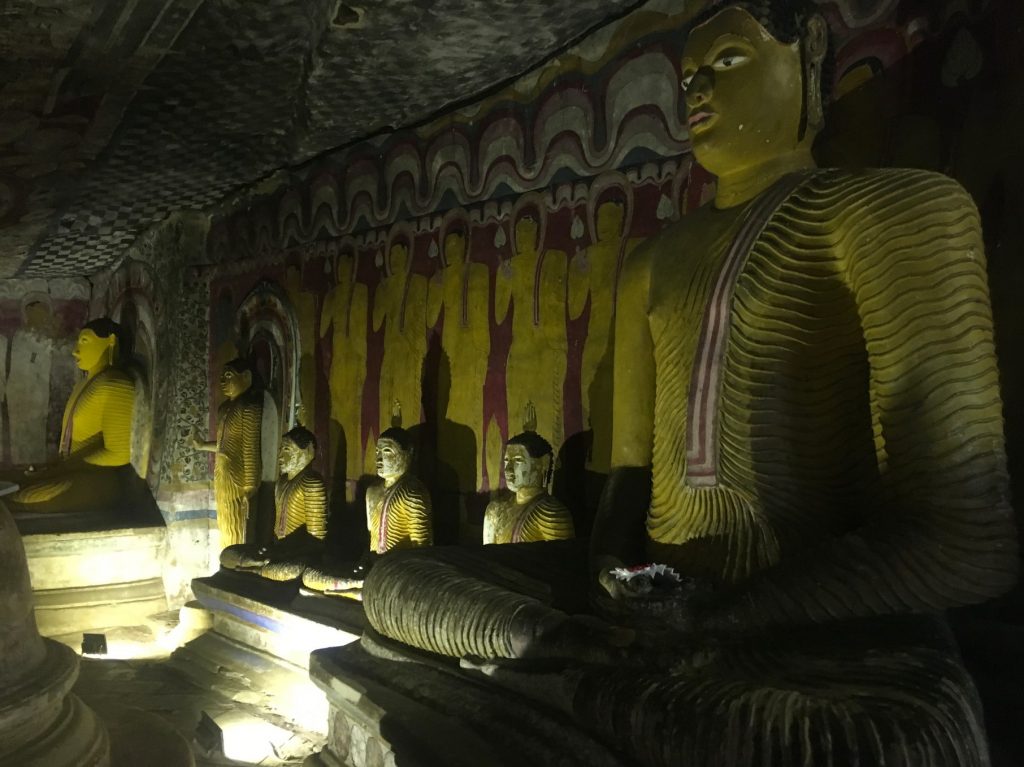 Public transport in Sri Lanka offers a whole new experience in travel. Tuktuks are ideal for shorter journeys and the most expensive form of travel, trains are the cheapest option with 3 classes; 1st is air conditioned with films, free water and cooling towels; 2nd has ceiling fans and reasonably comfy seats, 3rd is like British tube trains with no fans but a breeze from the open windows and doors to keep you cool. 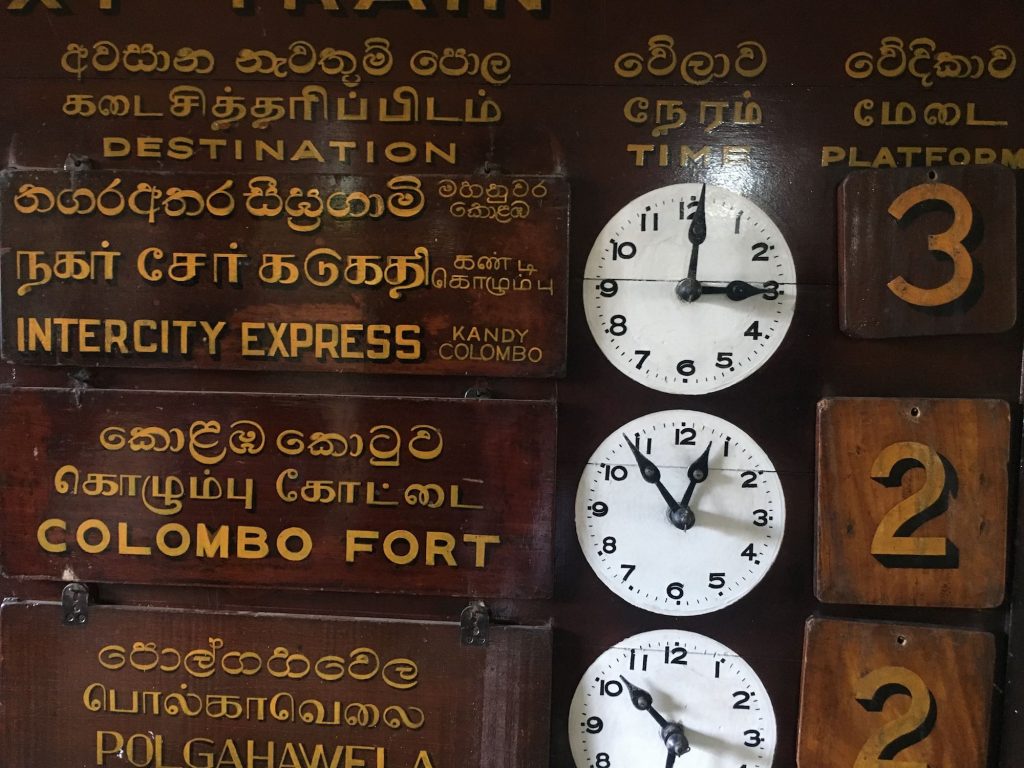 Train timetable board at Kandy

I took my first bus journey today from Galle to Hikka. I was literally squashed onto the bus and struggled to stay standing as the driver swerved, braked, constantly sounded the loud horn, and frenziedly overtook other vehicles at every opportunity. Getting off is just as hazardous as the bus barely slows down at stops so you have to leap clear and hope you stay intact.

Busses and train stations have a charming old fashioned feel with hand written paper bus tickets and sweet little printed train tickets that you hand to the ticket inspector.

May you live long!